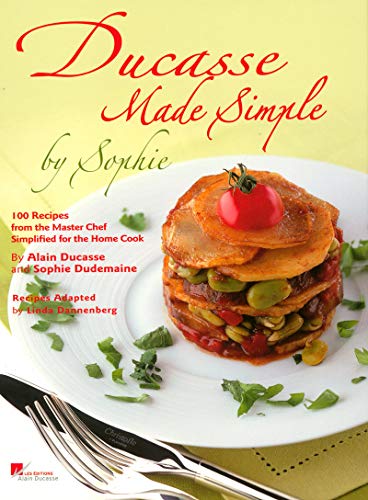 Ducasse Made Simple by Sophie: 100 Recipes from the Master Chef Simplified for the Home Cook

In this sumptuous book, Sophie Dudemaine--one of the bestselling cookbook authors in France--has selected and simplified 100 recipes from Alain Ducasse’s encyclopedic Grand Livre de Cuisine. While retaining the spirit of Ducasse’s recipes, Dudemaine has made the world-renowned chef’s cuisine accessible to every home cook. In addition, Linda Dannenberg, the author of more than 20 books on French cooking and culture (as well as Stewart, Tabori and Chang’s Perfect Vinaigrettes), has tested and adapted the recipes for an American audience.   The book includes a wide range of starters such as pumpkin velout#65533; soup and scallop salad; entr#65533;es such as salmon with morels, scampi carpaccio, spicy lamb loin, and duck #65533; l’oran≥ side dishes such as pesto pasta and risotto with zucchini and parmesan; and desserts such as apricot tarts, macaroons with mascarpone, and caramel ice cream, among many other delights. Recipes range from classic French dishes (foie gras, chicken fricass#65533;e, and cr#65533;pes Suzette) to international favorites (lobster Newburg and veal saltimbocca).   Whether preparing meals for family, friends, or entertaining, home cooks of every ability will enjoy creating their own cuisine #65533; la Ducasse.… (more)