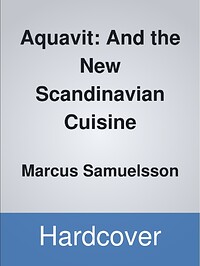 Aquavit: And the New Scandinavian Cuisine

In this long-awaited book, Marcus Samuelsson introduces the simple techniques and exciting combinations that have won him worldwide acclaim and placed Scandinavian cooking at the forefront of the culinary scene. Whether it's a freshly interpreted Swedish classic or a dramatically original creation, each one of the dishes has been flawlessly recreated for the home cook. Every recipe has a masterful touch that makes it strikingly new: the contrasting temperatures of Warm Beef Carpaccio in Mushroom Tea, the pleasing mix of creamy and crunchy textures in Radicchio, Bibb, and Blue Cheese Salad, the cornflake coating on a delightful rendition of Marcus's favorite "junk food," Crispy Potatoes. In "The Raw and the Cured," Marcus presents the cornerstone dishes of the Scandinavian repertoire, from a traditional Gravlax with Mustard Sauce (which gets just the right balance from a little coffee) to the internationally inspired Pickled Herring Sushi-Style. The clean, precise flavors of this food are reminiscent of Japanese cuisine but draw upon accessible Western ingredients. Marcus shows how to prepare foolproof dinners for festive occasions: Crispy Duck with Glogg Sauce, Herb-Roasted Rack of Lamb, and Prune-Stuffed Pork Roast. Step by step, offering many suggestions for substitutions and shortcuts, he guides you through the signature dishes that have made Aquavit famous, like Dill-Crusted Arctic Char with Pinot Noir Sauce, Pan-Roasted Venison Chops with Fruit and Berry Chutney, and Fois Gras "Ganache." But you'll also find dozens of homey, comforting dishes that Marcus learned from his grandmother, like Swedish Roast Chicken with Spiced Apple Rice, Chilled Potato-Chive Soup, Blueberry Bread, Corn Mashed Potatoes, ethereal Swedish Meatballs with Quick Pickled Cucumbers, and Swedish Pancakes with Lingonberry Whipped Cream. From simplest-ever snacks like Sweet and Salty Pine Nuts and Barbecued Boneless Ribs, to satisfying sandwiches like Gravlax Club, to vibrant jams and salsas and homemade flavored aquavits, Marcus Samuelsson's best recipes are here. Lavishly photographed, Aquavit and the New Scandinavian Cuisine provides all the inspiration and know-how needed for stunning success in the kitchen.… (more)