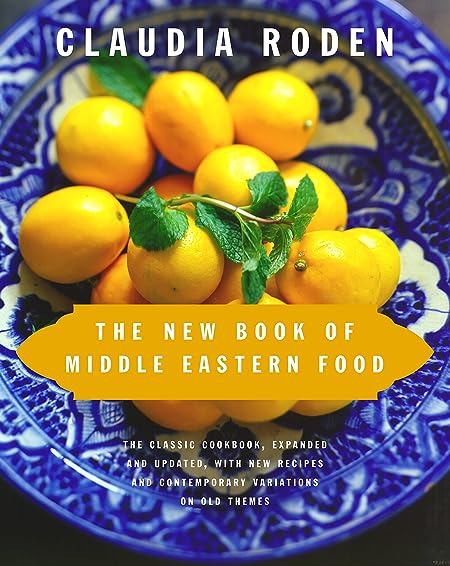 On this Updated and Greatly Enlarged Edition of her Book of Middle Eastern Food, Claudia Roden re-creates a classic. The book was originally published here in 1972 and was hailed by James Beard as "a landmark in the field of cookery"; this new version represents the accumulation of the author's thirty years of further extensive travel throughout the ever-changing landscape of the Middle East, gathering recipes and stories. Now Ms. Roden gives us more than 800 recipes, including the aromatic variations that accent a dish and define the country of origin: fried garlic and cumin and coriander from Egypt, cinnamon and allspice from Turkey, sumac and tamarind from Syria and Lebanon, pomegranate syrup from Iran, preserved lemon and harissa from North Africa. She has worked out simpler approaches to traditional dishes, using healthier ingredients and time-saving methods without ever sacrificing any of the extraordinary flavor, freshness, and texture that distinguish the cooking of this part of the world. Throughout these pages she draws on all four of the region's major cooking styles. From the tantalizing mezze-those succulent bites of filled fillo crescents and cigars, chopped salads, and stuffed morsels, as well as tahina, chickpeas, and eggplant in their many guises-to the skewered meats and savory stews and hearty grain and vegetable dishes, here is a rich array of the cooking that Americans embrace today. No longer considered exotic-all the essential ingredients are now available in supermarkets, and the more rare can be obtained through mail order sources (readily available on the Internet)-the foods of the Middle East are a boon to the home cook looking for healthy, inexpensive, flavorful, and wonderfully satisfying dishes, both for everyday eating and for special occasions. Claudia Roden's seminal book on Middle Eastern cooking, which James Beard called "a landmark in the field of cookery" when it was first published in 1972, is made new-with additional recipes, extensive variations, & new techniques, the fruit of 30 years of travel & research. There are now more than 800 recipes (including variations) from Morocco & Tunisia, Turkey & Greece, Lebanon, Syria, Egypt, Persia, & other Middle Eastern countries. They represent the best of the Middle East, & they stress simple dishes, healthful ingredients, & time-saving methods, with no sacrifice of extraordinary variety or delectable flavor. Richly infused with Roden's own memories of growing up in Egypt & with stories of her travels, the book is an excursion not merely into the cuisine of the region but into its culture as well. It is a book that both preserves the past & is alive with the present: a masterpiece made even more masterly-the quintessential Middle Eastern cookbook. The refined haute cuisine of Iran, based on rice exquisitely prepared and embellished with a range of meats, vegetables, fruits, and nuts-Arab cooking from Syria, Lebanon, and Jordan-at its finest today, and a good source for vegetable and bulgur wheat dishes-The legendary Turkish cuisine, with its kebabs, wheat and rice dishes, yogurt salads, savory pies, and syrupy pastries-North African cooking, particularly the splendid fare of Morocco, with its heady mix of hot and sweet, orchestrated to perfection in its couscous dishes and tagines.… (more)

Arabesque: A Taste of Morocco, Turkey, and Lebanon by Claudia Roden
The Book of Jewish Food: An Odyssey from Samarkand to New York by Claudia Roden
Claudia Roden's the Food of Italy: Region by Region by Claudia Roden
The Moro Cookbook by Samuel Clark
French Provincial Cooking (Penguin Classics) by Elizabeth David
19 more
Jerusalem: A Cookbook by Yotam Ottolenghi
Italian Food (Penguin Classics) by Elizabeth David
Paula Wolfert's world of food: A collection of recipes from her kitchen, travels, and friends by Paula Wolfert
Ottolenghi: The Cookbook by Yotam Ottolenghi
The Slow Mediterranean Kitchen: Recipes for the Passionate Cook by Paula Wolfert
Feast: Food of the Islamic World by Anissa Helou
The Cooking of the Eastern Mediterranean: 215 Healthy, Vibrant, and Inspired Recipes by Paula Wolfert
Thai Food by David Thompson
The Splendid Table: Recipes from Emilia-Romagna, the Heartland of Northern Italian Food by Lynne Rossetto Kasper
Hot Sour Salty Sweet: A Culinary Journey Through Southeast Asia by Jeffrey Alford
A Mediterranean Feast: The Story of the Birth of the Celebrated Cuisines of the Mediterranean from the Merchants of Venice to the Barbary Corsairs, with More than 500 Recipes by Clifford A. Wright
Flatbreads & Flavors: A Baker's Atlas by Jeffrey Alford
Food of Life: Ancient Persian and Modern Iranian Cooking and Ceremonies (25th Anniversary Edition) by Najmieh Batmanglij
The Food of Spain by Claudia Roden
Essentials of Classic Italian Cooking by Marcella Hazan
Plenty: Vibrant Recipes from London's Ottolenghi by Yotam Ottolenghi
Simple French Food by Richard Olney
Casa Moro by Sam Clark
The Kitchen Diaries: A Year in the Kitchen with Nigel Slater by Nigel Slater
Fewer