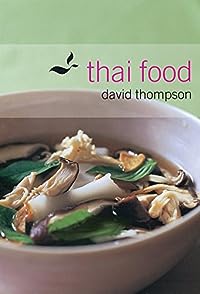 Renowned chef David Thompson first went to Thailand by mistake- a holiday plan had to be changed at the last minute and he ended up in Bangkok, where he was seduced by the people, their culture and cuisine. Since that fateful trip some 20 years ago, Thailand has become his second home. Working alongside cooks who had perfected their craft in the Thai royal palaces, he began to document the traditional recipes and culinary techniques that have been handed down from generation to generation - before they were eroded, altered and modernised beyond all recognition. The result is Thai Food, the most comprehensive account of this ancient and exotic cuisine ever published in English. David Thompson writes with passion and conviction about a unique style of cooking that he believes to be one of the world's greatest cuisines. Complemented by Earl Carter's superb photography, Thai Foodcaptures all aspects of this diverse culinary culture.… (more)

Land of plenty : a treasury of authentic Sichuan cooking by Fuchsia Dunlop
Thai Street Food by David Thompson
Cradle of Flavor: Home Cooking from the Spice Islands of Indonesia, Singapore, and Malaysia by James Oseland
The Moro Cookbook by Samuel Clark
Arabesque: A Taste of Morocco, Turkey, and Lebanon by Claudia Roden
19 more
Hot Sour Salty Sweet: A Culinary Journey Through Southeast Asia by Jeffrey Alford
The Complete Asian Cookbook by Charmaine Soloman
Burma: Rivers of Flavor by Naomi Duguid
Pok Pok: Food and Stories from the Streets, Homes, and Roadside Restaurants of Thailand by Andy Ricker
Into the Vietnamese Kitchen: Treasured Foodways, Modern Flavors by Andrea Nguyen
Beyond the Great Wall: Recipes and Travels in the Other China by Jeffrey Alford
French Provincial Cooking (Penguin Classics) by Elizabeth David
The Zuni Cafe Cookbook: A Compendium of Recipes and Cooking Lessons from San Francisco's Beloved Restaurant by Judy Rodgers
Vatch's Thai Street Food by Vatcharin Bhumichitr
The New Book of Middle Eastern Food by Claudia Roden
Ottolenghi: The Cookbook by Yotam Ottolenghi
Italian Food (Penguin Classics) by Elizabeth David
Plenty: Vibrant Recipes from London's Ottolenghi by Yotam Ottolenghi
The Food of Asia by Kong Foong Ling
Every Grain of Rice by Fuchsia Dunlop
Made in Italy: Food and Stories by Giorgio Locatelli
Casa Moro by Sam Clark
The Slow Mediterranean Kitchen: Recipes for the Passionate Cook by Paula Wolfert
Asian Dumplings: Mastering Gyoza, Spring Rolls, Samosas, and More by Andrea Nguyen
Fewer