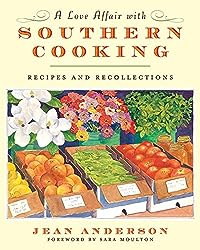 A Love Affair with Southern Cooking: Recipes and Recollections

More than a cookbook, this is the story of how a little girl, born in the South of Yankee parents, fell in love with southern cooking at the age of five. And a bite of brown sugar pie was all it took. "I shamelessly wangled supper invitations from my playmates," Anderson admits. "But I was on a voyage of discovery, and back then iron-skillet corn bread seemed more exotic than my mom's Boston brown bread and yellow squash pudding more appealing than mashed parsnips." After college up north, Anderson worked in rural North Carolina as an assistant home demonstration agent, scarfing good country cooking seven days a week: crispy "battered" chicken, salt-rising bread, wild persimmon pudding, Jerusalem artichoke pickles, Japanese fruitcake. Later, as a New York City magazine editor, then a freelancer, Anderson covered the South, interviewing cooks and chefs, sampling local specialties, and scribbling notebooks full of recipes. Now, at long last, Anderson shares her lifelong exploration of the South's culinary heritage and not only introduces the characters she met en route but also those men and women who helped shape America's most distinctive regional cuisine--people like Thomas Jefferson, Mary Randolph, George Washington Carver, Eugenia Duke, and Colonel Harlan Sanders. Anderson gives us the backstories on such beloved Southern brands as Pepsi-Cola, Jack Daniel's, Krispy Kreme doughnuts, MoonPies, Maxwell House coffee, White Lily flour, and Tabasco sauce. She builds a time line of important southern food firsts--from Ponce de Le#65533;n's reconnaissance in the "Island of Florida" (1513) to the reactivation of George Washington's still at Mount Vernon (2007). For those who don't know a Chincoteague from a chinquapin, she adds a glossary of southern food terms and in a handy address book lists the best sources for stone-ground grits, country ham, sweet sorghum, boiled peanuts, and other hard-to-find southern foods. Recipes? There are two hundred classic and contemporary, plain and fancy, familiar and unfamiliar, many appearing here for the first time. Each recipe carries a headnote--to introduce the cook whence it came, occasionally to share snippets of lore or back-stairs gossip, and often to explain such colorful recipe names as Pine Bark Stew, Chicken Bog, and Surry County Sonker. Add them all up and what have you got? One lip-smackin' southern feast! A Love Affair with Southern Cooking is the winner of the 2008 James Beard Foundation Book Award, in the Americana category.… (more)