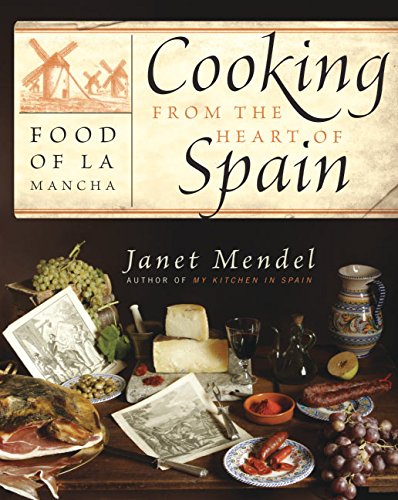 Cooking from the Heart of Spain: Food of La Mancha

For forty years, American-born freelance journalist and award-winning cookbook author Janet Mendel has made her home in Spain. Becoming a "local" has provided Mendel with the unique opportunity to explore the authentic foods of her adopted country, and to bring the best recipes to American kitchens. Now, in Cooking from the Heart of Spain, she turns her attention to the region of La Mancha. Mendel has taken part in the harvesting of saffron, wine grapes, and garlic. She has made marzipan in Toledo, joined in a partridge shoot, and prepared trout caught fresh from the streams in Cuenca. She tells stories of artisanal cheesemakers and wine producers. Her own home in an olive grove gives her special insight into world-class Spanish olive oil. Cooking from the Heart of Spain features traditional foods from the country's heartland, a region of vineyards, olive groves, and wheat fields. From here come Spain's most famous products -- Manchego cheese, saffron, serrano ham, and olive oil. These ingredients, along with its rich and diverse Moorish and Sephardic heritages, give Manchegan cooking an air of refinement and delicate complexity beyond its sturdy simplicity. The recipes in Cooking from the Heart of Spain include simple pisto, a medley of summer vegetables saut#65533;ed in olive oil; lamb stuffed with spinach and pine nuts; a robust peasant garlic soup; and a delightfully subtle saffron ice cream. Mendel also includes sophisticated dishes such as cheese and ham flan and partridge braised in wine sauce, as well as fun food, such as "fried milk," a sweet custard with a crisp-fried exterior. Oh, yes -- and Madrid tapas too. Laced with quotes from Cervantes' Don Quixote -- which had lots to say about the food of La Mancha -- Janet Mendel#65533;s cookbook provides recipes for delicious dishes, both traditional and modern.… (more)

La Cocina de Mama: The Great Home Cooking of Spain by Penelope Casas
Fonda San Miguel: Thirty Years Of Food And Art by Tom Gilliland
Sweet Myrtle and Bitter Honey: The Mediterranean Flavors of Sardinia by Efisio Farris
Delicioso! The Regional Cooking of Spain by Penelope Casas
The New Spanish Table by Anya von Bremzen
24 more
Oaxaca al Gusto: An Infinite Gastronomy (The William and Bettye Nowlin Series in Art, History, and Culture of the Western Hemisphere) by Diana Kennedy
Tapas: A Taste of Spain in America by Jose Andres
Made in Spain: Spanish Dishes for the American Kitchen by Jose Andres
Dishes from the Wild Horse Desert: Norteño Cooking of South Texas by Melissa Guerra
The Basque Table: Passionate Home Cooking from One of Europe's Great Regional Cuisines by Teresa Barrenechea
Regional Foods of Southern Italy by Marlena de Blasi
The Catalan Country Kitchen HB: Food and Wine from the Pyrenees to the Mediterranean Seacoast of Barcelona by Torres
The Food of Spain and Portugal: The Complete Iberian Cuisine by Elizabeth Lambert Ortiz
Catalan Cuisine by Colman Andrews
Savoring Spain & Portugal: Recipes and Reflections on Iberian Cooking (Savoring ...) by Joyce Esersky Goldstein
Cucina of Le Marche: A Chef's Treasury of Recipes from Italy's Last Culinary Frontier by Fabio Trabocchi
Dancing Shrimp: Favorite Thai Recipes for Seafood by Kasma Loha-unchit
Spice: Flavors of the Eastern Mediterranean by Ana Sortun
Pleasures of the Vietnamese Table by Mai Pham
The Basque Book: A Love Letter in Recipes from the Kitchen of Txikito by Alexandra Raij
On Top of Spaghetti...: ...Macaroni, Linguine, Penne, and Pasta of Every Kind by Johanne Killeen
Adventures of an Italian Food Lover: With Recipes from 254 of My Very Best Friends by Faith Heller Willinger
Savory Baking from the Mediterranean: Focaccias, Flatbreads, Rusks, Tarts, and Other Breads by Anissa Helou
The Provence Cookbook by Patricia Wells
Foods of Sicily and Sardinia and the Smaller Islands by Giuliano Bugialli
The Summer Shack Cookbook: The Complete Guide to Shore Food by Jasper White
Essentials of Asian Cuisine : Fundamentals and Favorite Recipes by Corinne Trang
Mediterranean Vegetables: A Cook's ABC of Vegetables and Their Preparation by Clifford A. Wright
Culinaria Spain (Culinaria Series) by Marion Trutter
Fewer